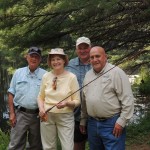 A great afternoon was shared with Senator Jeanne Shaheen, a few casting pointers and casting practice.

Senator Shaheen has always been a big supporter of environmental and conservation programs.  During her tenure as governor she worked with then Senator Gregg to protect 171,000 acres in northern New Hampshire that comprises the Connecticut Lakes area and the trophy sections of the Connecticut River.  This parcel abuts the 148,000 acres of the White Mountain National Forest.  As governor she worked to establish the Shore Land Protection Act which helps preserve much of NH’s 17,000 miles of rivers and stream and over 1000 lakes and ponds.

The National Land and Water Conservation Fund, which was created in 1965 to protect lands, waterways, forests, state and local parks, and critical wildlife habitats. The fund also helps to ensure fishing access, trails, and outdoor recreation opportunities in every state. Unfortunately, the fund has been chronically shortchanged and underfunded. Congress siphons off nearly two-thirds of the fund for unrelated purposes.

Each year since she arrived in the Senate, Senator Shaheen has led bipartisan efforts, along with Senator Pat Leahy of Vermont, to persuade their fellow members of the Senate Appropriations Committee to provide full funding for the Land and Water Conservation Fund at the $900 million level – funds derived from companies drilling off shore.

Senator Shaheen is also a cosponsor of bipartisan legislation that would permanently authorize the Land and Water Conservation Fund with dedicated funding.

Senator Shaheen has always been a supporter of the conservationist, outdoor enthusiast, anglers and hunters, the Merrimack River Valley Chapter of Trout Unlimited urges other New Hampshire chapters to support the continuation of the Land and Conservation Fund to protect our fresh water resources.