This spring and a Summer I was able to have many fishing days throughout the state and some out of state. Some will be memorable but not as memorable as the 3 times I ran into past campers from the New Hampshire’s Trout Unlimited Kids Trout Camp.

It all started this January at the Rockingham fishing & Hunting Expo, a young man came up to me and ask if I remembered him, I said of course and that he was Josh from the 2014 Trout Camp.  We chatted for a while, Josh was telling a few fish stories that he and his friend hade over the past summer and fall and that was  going to try to continue fly fishing and he and his friend left, which made me think ahead to this Junes Kids Camp and what would be there for campers.

In March I was working the Fly Fish New Hampshire Show and Josh and his friend was there also, I kind of had a feeling that this young man has been bitten by the trout fly.

We chatted again for a while, Josh was telling me that he had plans to graduate this June and he was still planning a few fishing trip with James.

Over the course of the next few months I was able to put a lot of time on the rivers and streams, some were for guiding clients and some were fishing with Burr Tupper and my wife who has taken up the sport of fly fishing.

One day Burr and I were fishing the Contoocook River in the Henniker area when I heard a voice calling form across the river Burr Burr and this young man started to wade across to chat with Burr, it was a camper from the 2013 Trout Camps, he acknowledge that he has been fly fishing every chance he gets and that the TU’s Trout Camp had much influence on him and how much he enjoyed fly fishing.

A few weeks had past when one day I got an email from Josh, he ask if I minded giving him some advice on where to fish, one major problem for Josh was that he lived in the southern part of New Hampshire and that it takes him at least 2 hours to get to any producing trout waters. He was thinking of driving up to the Sugar River with his friend James, I had just fished the Sugar with Burr and fishing was slow, I told Josh that he would be better off going to River XXX, Josh said that he has never fished that river and I told him that I was going to be there Saturday with my wife and he would be welcome to fish with us.  Sunday had come and my wife and I fish most of the morning, when we were back to our parking spot another car pulled in and it was Josh and James. We talk a bit I gave them some flies and told them a few spots to fish and my wife and I left for back home. A couple days later I received an email from Josh,

“Ron thank you so much for showing me that spot we did absolutely awesome all on buggers san juans and copper johns. We did so good we went back today and in two days we landed 19 trout, 17 rainbows, 1 brookie, and 1 brown. First day we fished for ten minutes after you left right next to the truck and caught three. We had a blast that river has a lot of fish in it and I really appreciate you telling me thank you so much. “

Over the next few weeks my wife and I talk about Josh and how rewarding it was to see some of the past campers out at events and fishing, the subject of past campers also came up while fishing with Burr.

Evidently Josh and James did not give up pursuing their goals for catching big trout, there June trip to Pittsburg, email from Josh,”  had some great results, “We ended up landing 3 brook trout over 3 lbs. and caught countless smaller brookies and rainbow trout in the trophy stretch.””

Their goal was to catch a big brown trout, so they both planned a second trip to the Great North Woods.

Josh and James arrived in Pittsburg on Thursday and started out there pursuit for the” Big Brown Trout” Like any good fly fisher Josh and James set out to find out some local information and how fishing was. They both stop by Chuck DeGray’s  owner of North Country Fly Shop located in Pittsburg, Chuck is a local fishing guide on the upper Connecticut River . The boys sought out information from the local guide on fishing for their Big Brown Trout, as most New Hampshire Licensed Guides Chuck gave up a few local secrets to them. I talk to Chuck and he stated the two young men are much interjected and are on the right path to becoming great fly fishers and they are welcome to chat anytime.

On the first morning they started out fishing with their own tied fly’s and were using articulated streams, after a while they had their dream fish on, after a battle of wits and river current they landed a 26 inch Brown Trout, the boys had fulfilled their dream but it was not ended, the rest of the day was spent on the Trophy Section of the Upper Connecticut River, I will let Josh tell you in his own words,

“My buddy and I kept fishing strong and killed day time hours by fishing the trophy stretch and landed again many fish all on homemade flies ( as that is the only thing we use). The next day he landed a 3 lb. brook trout and river was whooping our butts but we came back the last morning and my buddy landed a 22 inch rainbow. We had did it, caught all 3 trout and the smallest was 3 lbs.”

With receiving these email from Josh giving details of his summer fishing experiences and it has shed new light on how the New Hampshire Trout Unlimited Kids Trout Camp and the New Hampshire Fishing and Game Departments “Let’s Fishing Program” can be so important to some of our youths. Without these program and all the volunteers that interact with the campers and students none of this would have been possibly for these two young men.

Kids’ Trout Camp is conducted by the NH Trout Unlimited State Council and its chapters throughout the state. The five day camp teaches appreciation and stewardship of cold water fisheries through the art and science of fly fishing. Each student must submit at least a 250 word essay on why they would like to attend the camp and what they would expect to gain from it (conservation and fishing aspects), also a letter of recommendation from there your school counselor, science teacher or Trout Unlimited Chapter signed with their address and contact information is submitted.  Ages groups range from 14 to 17 years old. Camp days are filled with stream ecology, conservation, and restoration, learning river safety, fly-fishing and fly-tying skills.  NH Fish and Game Department staff assists in teaching conservation and stream ecology. NH licensed guides and NH “Let’s Go Fishing” instructors conduct fishing activities.  On-Stream fishing in the Connecticut River headwaters offers rainbow, brook and brown trout as well as landlocked salmon.  All Fly-Fishing equipment is provided including fly-tying kits. Cabin lodging is provided including meals from Wednesday’s dinner to Sunday’s breakfast.

Josh had told us that he would be heading off to Keene State College this fall, I told him not to hesitate to email if he gets back home and wanted to try some fall fishing.

When Josh was emailing to me he would insert photos of the catches, and in one of his email he wrote something that got pass me but over time I got to read it entirely and has made an impression on me

“I just wanted to say thanks for always reaching out to the young kids like me and take the time to cook at the trout camp and share your stories because without that kids camp I don’t know if I would have been inspired and had the passion to really hook me into fly fishing as I am now.

Well, have a great rest of your summer and I’ll get back to you with some big ones again next year thanks again – Josh  “

Josh will move on just as a river does, days will be full and days will be empty but Josh will always have his memories of fishing and his week at NH TU’s Kids Trout Camp. And as I sit here writing this I cannot help to think about next year’s Kids Trout Camp and if there will be another future fly fisher among them as Josh.

I hope they continue their quest for big trout and take each day as it comes, also I hope they pass on what they have learned to other up and coming fly fishers.

Josh has hope of becoming a part of the volunteer group that participates each year that make the camp so successful.

As I stated above Josh has documented most of his fish by taking photos. All of his fish were released unharmed for another to enjoy another day. 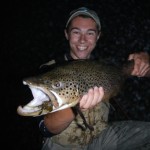 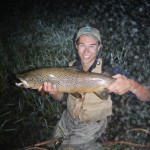 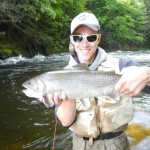 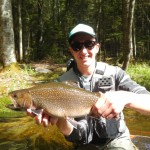 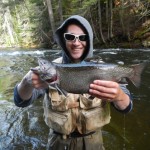